10 Types of Plumbing and Pipe Fittings

Suppose you are one of those individuals who like to take up things by themselves when there is an emergency or a crisis at home. This Do-It-Yourself (DIY) mentality is often on display when there is a plumbing routine in the house. Here’s a detailed explanation of the top ten most common types of plumbing fittings for affordable plumbing services. 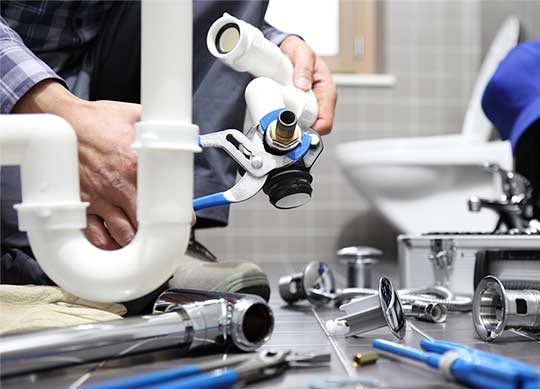 1.) Adapter
A plumbing adapter is skilfully developed with both male and female ends. The male end comes with threads on the outside, while the female end ensures threading on the inside. Plumbing professionals use adapters to create a connection between pipes of different sizes. Furthermore, they can be effectively used to convert a male pipe into a female and the other way around. It’s essential to mention that adapters come with three variants- male, female, and straight-threaded.

2.) Nipple
A pipe nipple is often considered the most common and vital plumbing fitting used in the trade. This plumbing fitting is generally used to establish a connection between pipes and regular domestic home appliances, namely water heaters. Its best suggested going through the necessary material, thickness, and diameter before a pipe nipple to ensure the perfect fitting.

3.) Union
It’s essential to mention that Union is skilfully developed of three parts: a nut, a female end, and a male end. Plumbing professionals use Union to connect two pipes, hence the name. The Union should be used on the tubes while remaining detached without damage or even any pipe deformation.

4.) Barb
Barb fittings are a tad different from the adapter mentioned above; these parts come with a male end and a tapered and ridged cone on the opposite end. They are thoughtfully developed to grip the inside of a tube, along with sealing the connection. With the barb added inside, the concerned hose or tube will immediately expand and then relax. It’s essential to mention that barb fittings are mostly used in gas, air, and fluid control applications under low pressure.

5.) Coupling
Couplings share similar features with unions. But it’s essential to mention that couplings can’t be detached without necessarily damaging the pipes. Plumbing professionals generally use them to connect two pipes (both the same size and diameter). Furthermore, they also offer the flexibility of changing pipe sizes.

6.) Cross
Owing much to the name, a cross is a four-way fitting part. For simple understanding, the shape of a cross can also be considered as double tees. They are designed to provide one inlet and three outlets. Additionally, they come with a solvent-welded socket or female-threaded ends. Plumbers often use them in carefully monitored conditions with no thermal expansion, like fire sprinkler systems.

7.) Tees
Tees come as a three-way plumbing fitting part. It looks more like a coupling, the only difference being the outlet in the middle.

8.) Saddle Tea
One could effectively say that saddle tees share similar traits to that of a real saddle. You can find them only in PVC for adding a tee to an existing pipe. The whole process can be executed without the need to cut or re-solder. They are generally involved with irrigation systems when the plumber needs to integrate new sprinkler lines.

9.) Wyes
This plumbing fitting part also shares a structural similarity with the alphabet “Y.” You can effectively use them for drainage fittings. Additionally, they come with a 45° angled branch that can lower turbulence and friction. Professional plumbers use Wyes to create a connection between vertical drain pipes and horizontal ones.

10.) Flanges
It’s essential to mention that a flange is a round-shaped plumbing fitting, which can be used to connect pipes. These pipes could be either threaded or welded through the middle of the flange, only to get sealed at the end. You can use the holes on the outside of the flange for bolts.

If you have a particular interest in plumbing or struggling with a plumbing crisis, you must call us at Platts Plumbing. Our industry-wide reputation as one of the most affordable plumbing services speaks volumes for competence in the trade.